Albuquerque has a current population of 915,000 and was founded in 1706 (Macrotrends.net). Over the years, the city and surrounding area have been the home of mining and industry that may have led many people to be exposed to asbestos.

For example, records indicate that more than 57,000 tons of asbestos were shipped to Albuquerque for various manufacturing and industrial purposes over the decades. The dangerous asbestos material was brought in from Libby, Montana. The mineral was used by many companies in the city for machinery, piping, wiring, gaskets, braking, and boilers.

Some other companies in Albuquerque that are known to have used asbestos are:

High-Industries for Asbestos Exposure in Albuquerque and New Mexico

The oil and gas industries are critical to New Mexico. The state has been a big producer of oil since the early 20th century. Approximately 11,000 people work in the industry here currently. The industrial processes needed to refine crude oil into petroleum and other products require a high amount of heat and chemical processes, so asbestos has been used throughout these facilities for years.

Some of the oil refineries near Albuquerque include Giant Refining and Navajo Refining and both are known to contain large amounts of asbestos.

Power plants and other industrial structures built before the 1980s are likely to contain high levels of asbestos, especially asbestos insulation. Equipment in these facilities, such as thermal control devices and turbines, also are likely to contain asbestos. Albuquerque Gas & Electric Company in Albuquerque and United Nuclear Corporation in Gallup used a lot of asbestos in their buildings that may have endangered workers.

While New Mexico did not have any active asbestos mines, there are other mines in the state that contain traces of asbestos. According to the New Mexico Environment Department, small amounts of asbestos have been found in mines for talc, limestone, and copper. Even a small amount of asbestos exposure among miners could lead to health problems later in life. Some of the mining companies that have come across asbestos include Phelps Dodge Mining, Chino Mines Company, and the Kerr Mcgee Potasa Mine.

Railroad workers in Albuquerque and other parts of the state were at high risk of asbestos exposure because of the heavy use of asbestos on locomotives. Gaskets, boilers, and engine rooms usually contained asbestos because of its high heat resistance. A.T. and Santa Fe Railway and Burlington Northern Santa Fe Railroad are two companies that are known to have used asbestos.

One of the biggest employers in the state is Kirtland Air Force Base in Albuquerque, which employs more than 23,000 people. Until the 1970s, asbestos was often used throughout the US military on bases and in naval vessels. In the mid-1980s, the US Air Force stated that asbestos was a hazard on its bases and created a system to begin asbestos abatement at its facilities throughout the country.

The Prewitt Refinery ceased operations in 1957, but the 70-acre site has many environmental dangers from old chemical and industrial processes. There are various wastes from refinery operations from decades ago, including asbestos and lead in the soil and groundwater. The EPA has been cleaning the site for several years, but it is possible former workers and residents in the area may have been exposed to asbestos and other toxins.

New Mexico is like many states when it comes to lawsuits involving asbestos. People with mesothelioma and other asbestos-related diseases have pursued legal action by holding companies liable for the development of their health problems.

For instance, in 2003, PNM Resources, which is the biggest electrical and power provider in New Mexico, was a defendant in 15 asbestos lawsuits. In another case, a woman sued 48 companies in 2011 for allegedly causing her husband’s lung cancer.

Mesothelioma patients in New Mexico are now able to sue several defendants at once. The state is seeing more mesothelioma lawsuits filed involving asbestos because the latency period for mesothelioma can be as long as 50 years.

If you or a loved one has been diagnosed with mesothelioma, contact one of these asbestos attorneys below:

If you or a loved one has mesothelioma, you know the financial toll of medical costs and disability can make dealing with cancer much worse. This law firm is experienced in providing support to mesothelioma victims and their families. They can get you the mesothelioma compensation you deserve for your losses.

People in New Mexico who have been diagnosed with mesothelioma or asbestosis need an experienced law firm fighting for them. Branch Law Firm has the years of experience and knowledge of the asbestos industry in New Mexico to get you the mesothelioma compensation you need to deal with your diagnosis.

At the Crecca Law Firm, your best asbestos attorney will work with you to get the maximum mesothelioma compensation for your family. This law firm has spent years working on complex mesothelioma cases and knows how to stand up to big industrial and manufacturing companies that needlessly exposed workers to asbestos.

With over $30 billion available for victims through the Asbestos Trust Funds, you could be entitled to financial compensations without ever filing a lawsuit. Mesothelioma & Lung Cancer victims qualify immediately. Complete the form or call us toll-free (800) 352-0871. 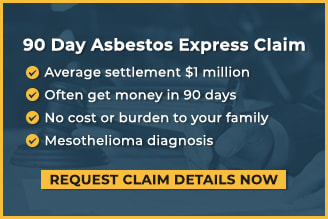